What is the maximum number of cables that can be installed in a pre-formed concrete cable trough?

The current-carrying capacity of cables has often been discussed on the IET Engineering Communities Forum and we also receive several enquiries on the IET technical helpline on the topic. How much current a cable can carry is down to physics and is a highly technical subject in its own right.

The question that was asked, and is primarily responsible for publishing this article, was:

‘What is the maximum number of cables that can be installed in a pre-formed concrete cable trough?’

The enquiry was related to an extensive electric vehicle (EV) charging project: the designer needed to consider derating factors for up to 60 cables installed in a concrete trench.

Whilst I have no intention of exploring the minefield of complex heat loss equations in this article, I would like to provide a very high-level overview of the concept and complexities of calculating the current-carrying capacity of cables.

What affects the current-carrying capacity of cables?

The current-carrying capacity of a cable is determined by the maximum permitted conductor temperature and the rate at which it dissipates heat into the environment, taking into account the surrounding material, which will have thermal properties and resist the dissipation of heat, this is called I2R losses. Other losses include dielectric losses from insulating materials, skin effect introduced by alternating current, and eddy current losses.

How to select current rating for cables in troughs

Table 4C6 of BS 7671:2018+A1:2020 provides rating factors for cables enclosed in concrete floor troughs. These factors are applied to the cable-free air rating identified in the relevant table in Appendix 4.

The rating factors for cables enclosed in concrete floor troughs were first introduced in Table 30 of the 13th Edition of the IEE Wiring Regulations, which was published in 1955. Other than the conductor sizes changing to metric, these ratings have remained unchanged. Whilst technology has advanced significantly since then, the laws of physics remain unchanged.

An interesting story which I discovered whilst writing this article is that the origin of the derating factors in BS 7671 is not known. According to the IEEE document Ampacity Calculations for Cables in Shallow Troughs (G. Anders, M. Coates and M. Chaaban), a draft document has been found that derives a simple equation for the calculation of thermal resistance of a trough. The document is not dated and no author is provided, but it is believed to have been prepared by one or more of the UK cable manufacturers. The references in the document indicate that it was produced in the late 1940s or early 1950s. 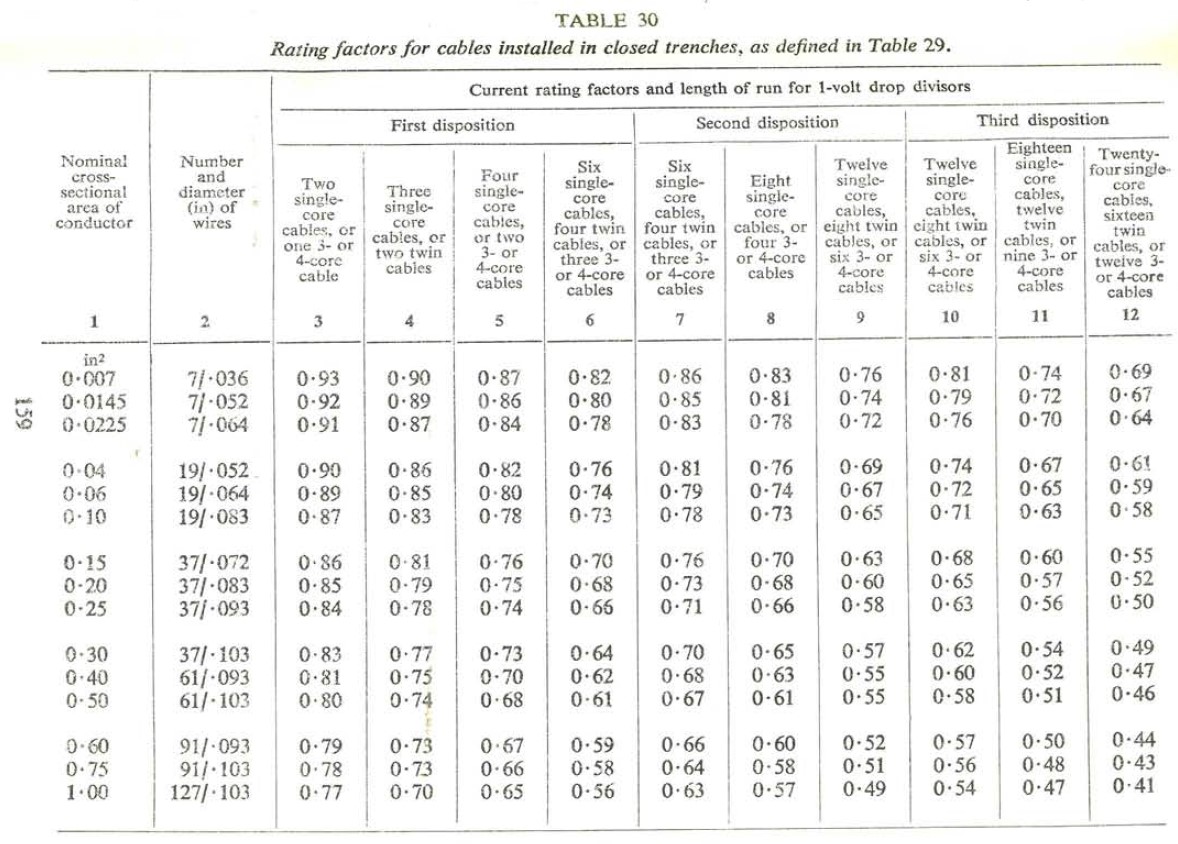 BS 7671:2018+A1:2020 contains tables of ratings and rating factors for commonly used cables and installation methods. The current-carrying capacities identified in BS 7671:2018+A1:2020 were derived from a combination of IEC standards and a piece of work carried out by an organization called RINA, formerly ERA (the Electrical Research Association). The first parts of the ERA 69-30 series of reports were published in 1969. The reports are still available and can be purchased here.

The current-carrying capacity of cables identified in Appendix 4 of BS 7671:2018+A1:2020 will cover most installations, but the values will be on the conservative side and will not necessarily provide the most efficiently sized cable (depending on how you define ‘efficient’). For further information, see the IET Wiring Matters article Amps per pound. It is always best to consult cable manufacturers for advice when carrying out any non-standard cable calculations.

If every possible cable and installation method was identified in BS 7671:2018+A1:2020, the size of the Standard would increase significantly. Whilst BS 7671:2018+A1:2020 does cover most typical electrical installations, there will be instances when installations will differ from those identified in the Standard. In this scenario, the designer will have to make an engineering judgement to determine the current-carrying capacity of the cable or seek advice from cable manufacturers.

Judgement could be based on published correction and derating factors in BS 7671:2018+A1:2020, further corrected by the electrical engineer, or by guidance from the manufacturer, which is preferable. In some cases, it may be necessary to perform detailed heat transfer calculations to determine a cable’s current-carrying capacity.

It is important that these calculations are carried out by someone who is experienced in this field of work (which may not necessarily be an electrical engineer). The physics involved with heat loss have similarities with those of mechanical engineering and are based on heat transfer principles. There are consultancies that specialize in this type of work.

Which standards cover the calculation of the current-carrying capacity of cables?

The international standards that cover the current-carrying capacity of cables are the IEC 60287 series for steady-state conditions and IEC 60853 for cyclic conditions for most practical applications.

These standards contain methods for calculating the permissible current rating of cables from details of the permissible temperature rise, conductor resistance, losses and thermal resistivities, using analytical methods. Many of the equations in these standards are based on fundamental heat transfer theory, and others are empirical equations derived from test work. Empirical equations are based on observations and experience, rather than theories.

The calculation method is complex and time-consuming, with additional possibilities of introducing errors, and thus the finite element method is the favoured approach of engineers today. Finite element analysis is a numerical method used to solve complex engineering problems, usually carried out on simulation software. This method subdivides the problem into smaller problems called ‘finite elements which these are solved and put back into the original problem.

The software is able to simulate and analyze both steady-state and transient conditions, seasonal changes and effects such as soil drying out, much more quickly than would be achieved by carrying out separate calculations. 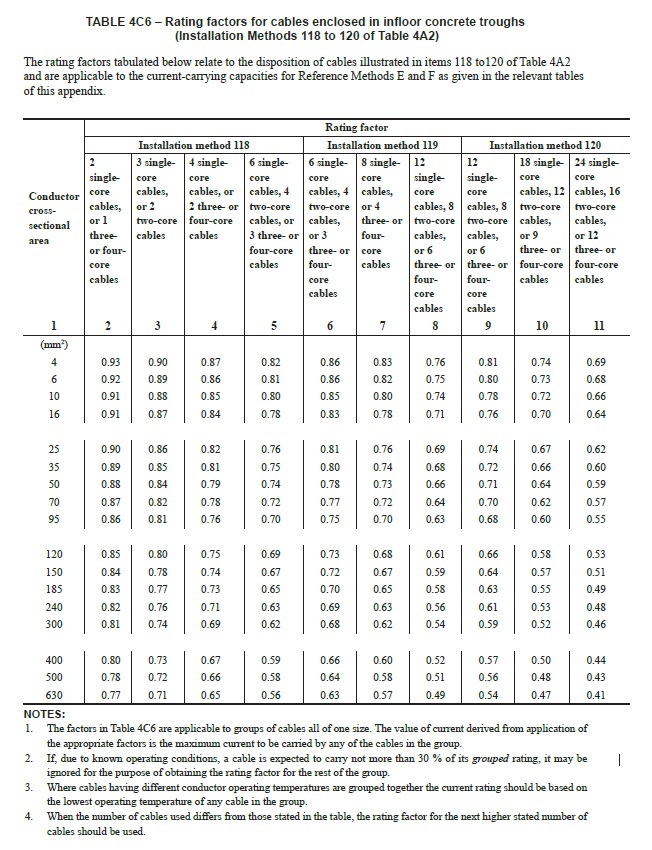 How to calculate current ratings for cables in troughs

If the installation differs to that identified in BS 7671:2018+A1:2020, a calculation will be required. Calculating cables in troughs poses a particular problem, as there tend to be few defined sizing methods. One common approach is to use the empirical method identified in IEC 60287-2-1:2015 Calculation of the current rating — Calculation of thermal resistance. 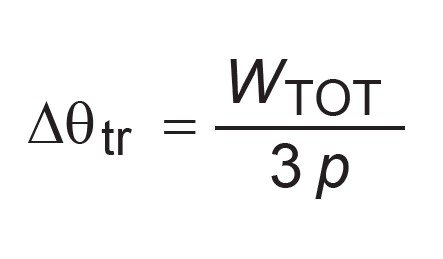 The method involves calculating a temperature rise of the air in the trough above its ambient, with the rating then being calculated as though it were in free air, but with the increased temperature. It is important to remember that anyone carrying out these calculations should work directly from a copy of the relevant standard.

Some studies have found the empirical method to be conservative, owing to the fact that it does not take account of the specific thermal environment outside of the cable. If the designer wants to avoid this conservatism, a full calculation taking into account the environment outside the cable would be required, typically using finite element analysis.

Items to consider include the thermal resistance of separate parts, such as the cable, the cable surface to the inner trough, the trough’s internal surfaces and the outer surface of the trough with its environment.

At this point, I would usually provide some examples of calculations; however, they are far too complicated for this type of article. For more detailed guidance on calculation methods, see the IEEE document Ampacity Calculations for Cables in Shallow Troughs (G. Anders, M. Coates and M. Chaaban).

Determination of the current-carrying capacity by calculating the actual heat transfer is likely to result in a less conservatively sized cable. For smaller projects, this may not have much of an impact, but for larger projects and high design currents, this could be extremely beneficial, in terms of both physical size and cost.

If several installation methods are adopted for a cable, such as being buried underground for part of the route, and on cable tray for the remaining part, it is common practice for the designer to select the worst-case scenario and apply that to the whole cable run. If a detailed heat transfer calculation is carried out, however, a more accurate analysis of the whole cable route can be performed.

To avoid the ordeal of calculating the current-carrying capacity of cables, where possible, utilise the installation methods and rating factors already published: someone has already done the hard work for you! Failing that, speaking to the manufacturers of the cable is always a good place to start.