World War II started on 1 September 1939 and ended on 2 September 1945, lasting six years and, still to this day, remains the deadliest conflict in history, claiming an estimated 70 million lives. This article looks at the role the Institution of Electrical Engineers (IEE) had to play during wartime and why relaxations to the IEE Wiring Regulations during that period were deemed necessary.

During the war there was a shortage of everything; fuel, food, clothes and materials generally but copper was in particularly high demand. Copper had to be imported to the UK by merchant ships that were under relentless attack from the air by Luftwaffe aircraft and the sea by enemy U-boats.

The shortage of copper was due to the high demand for ships, aircraft, and other fighting vehicles. The copper was needed to manufacture motors, control and power wiring, radios and radar equipment. Copper was also required to manufacture brass artillery shells and small arms ammunition which was urgently needed in large quantities.

As part of the war effort, the IEE Wiring Regulations ‘Nucleus’ Committee was tasked with exploring options for economizing materials used in electrical installations. A meeting was held on 5 May 1942 to discuss ‘war emergency current ratings of cables’. The committee considered various proposals, primarily relating to the safe current ratings of cables, in particular Table 5 and whether it should be modified as a measure of the war economy.

A proposal was also submitted to increase the maximum permissible voltage drop in the cables of an installation; it was pointed out that ‘the economy of the proposed increases in the allowance for voltage drop could easily be offset by the wastage of coal necessary to supply such lost energy’.

The various different types of larger lead-covered cables were considered; impregnated-paper-insulated cables, varnished-cambric-insulated cables and impregnated-jute-insulated cables as indicated in Tables 10, 11 and 12 of the Eleventh Edition of the IEE Wiring Regulations. It was pointed out that the case was not similar to that of vulcanized-rubber-insulated cables as these cables were already run at a considerably higher maximum temperature, and the outer temperature of the cable sheaths was correspondingly greater. It was said that a 20% increase in current-carrying capacity would lead to a significant increase in sheath temperature which would be compounded by the fact that cables sheaths would be thinner as a result of the emergency war measures. It was decided that it would not be appropriate to increase the current ratings for these types of cables.

Mineral-insulated cables were discussed and it was agreed that an increase could safely be made, as the cables did not suffer deterioration as a result of high temperature and as a result should be based on the upper limit of temperature on the exterior of the cable which was considered to be 72°F (40°C). Smaller mineral-insulated cables were amended to align with Table 5 or 5(A) as appropriate, Table 10 (A) was provided for larger mineral insulated cables and was modified to reflect the decision to increase the current rating.

That said, having considered the urgent need for economy in the use of rubber, copper, and lead for electric cables, it was agreed to recommend increasing the maximum permissible voltage drop and current ratings of certain types of cables and due to the urgent nature of the request, a draft was included in the minutes of the meeting for approval by the IET Council.

The committee recommended that the relaxations be introduced in a convenient form, for use as a war emergency relaxation of the relevant sections of the Eleventh Edition of the IEE Wiring Regulations for the period of the war or until the shortage of materials no longer existed.

The recommended IEE war emergency relaxations were published on 26 June 1942, issued in the form of a supplement to the Eleventh Edition of the IEE Wiring Regulations, as seen in Figure 2 and Figure 3.

Considering the initial discussions only took place on 5 May 1942, this was turned around very quickly and when you bear in mind it was without the use of modern technology to facilitate the process, such as laptops, emails, mobile phones, or virtual meetings, it has to be said it is quite impressive.

Both versions of Table 5, extracted from the Eleventh Edition of the IEE Wiring Regulations and the IEE recommended war relaxations are compared in Table 1 below.

It could be said that the ratings were rather arbitrary, even after the relaxations were withdrawn, the conductor sizes of 1/.044” (1 mm²) and 3/.029 (1.5 mm²) had the same current rating of 5 amps and this remained until the introduction of a separate table for PVC insulated cables in the Thirteenth Edition of the IEE Wiring Regulations in 1955.

For larger cables, such as those identified in Tables 6 to 9 of the Eleventh Edition of the IEE Wiring Regulations, the current-carrying capacity was increased by 20%. 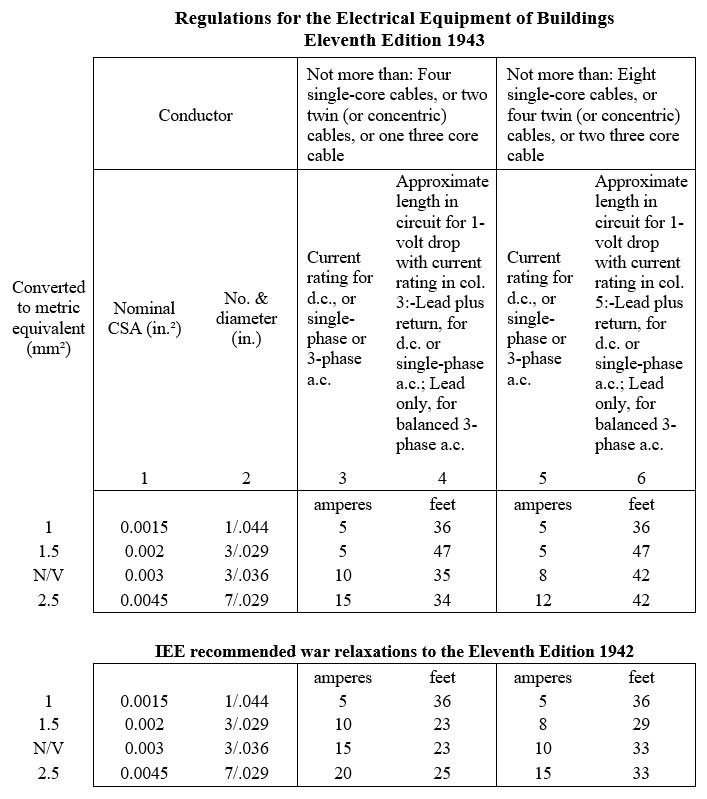 Regulation 304 of the Eleventh Edition of the IEE Wiring Regulations required that the voltage drop to any point on the installation does not exceed 1 volt plus 2% of the voltage at the consumer's terminals.

The recommended war emergency relaxations of the IEE Wiring Regulations stated the voltage drop in the consumers installation ‘may, if desired, be such that under normal conditions of load the voltage at the terminals of any lamp or appliance is not less than 95 per cent of the declared voltage of the supply.’ The cable lengths in Table 5 were revised to reflect the additional allowance.

When were the IEE War emergency relaxations withdrawn?

A letter dated 19 October 1945 received from the Cable Makers Association was considered by the committee, it was agreed that in the absence of any positive information on the connection between the increased temperature rise on cables subjected to war relaxation measures and the degree of accelerated deterioration that might result, it was undesirable for the relaxations to be permanent and it was agreed to make this recommendation to the council.

The committee also considered a letter dated 8 November 1945 from the British Electrical and Allied Industries Research Association suggesting that sufficient time had elapsed since the last issue of the Regulations to justify a review of the cable ratings contained therein, especially with regard to the experience which had been obtained during the war. The committee felt that this was not an urgent matter but may be desirable at a later date.

A suggestion was made to undertake an investigation on the effects of operating cables at increased ratings as, for example, those given in the War Emergency Relaxations. Consideration was also given to the effect withdrawal of the relaxations would have on existing installations, it was felt that continued use of such installations should be permitted until circumstances warranted further action.

The relaxations as a whole were reviewed and it was agreed that certain aspects of the war emergency relaxation measures should remain, as identified below.

Table 5 was reinstated with current-carrying capacity values from pre-war as seen in Figure 5, but additional tables were included to cover earthed concentric cables (Table (5A)), mineral-insulated copper-sheathed cables (Table (5B)) and flexible cords (Table 14). The words ‘or P.V.C insulated cables’ were inserted after ‘vulcanized-rubber-insulated’ for Tables 5, 6 and 7. 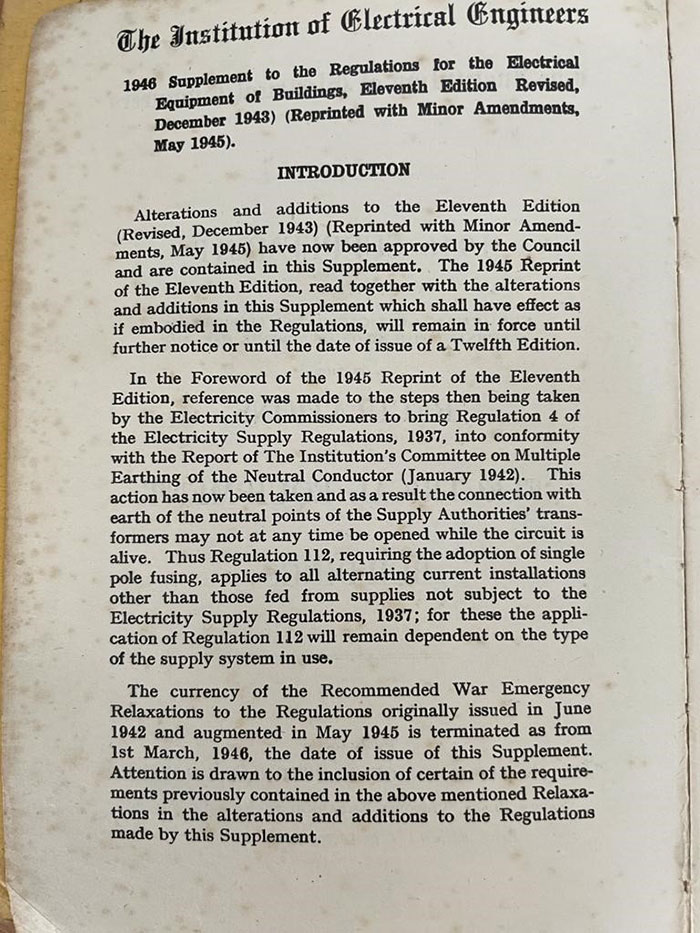 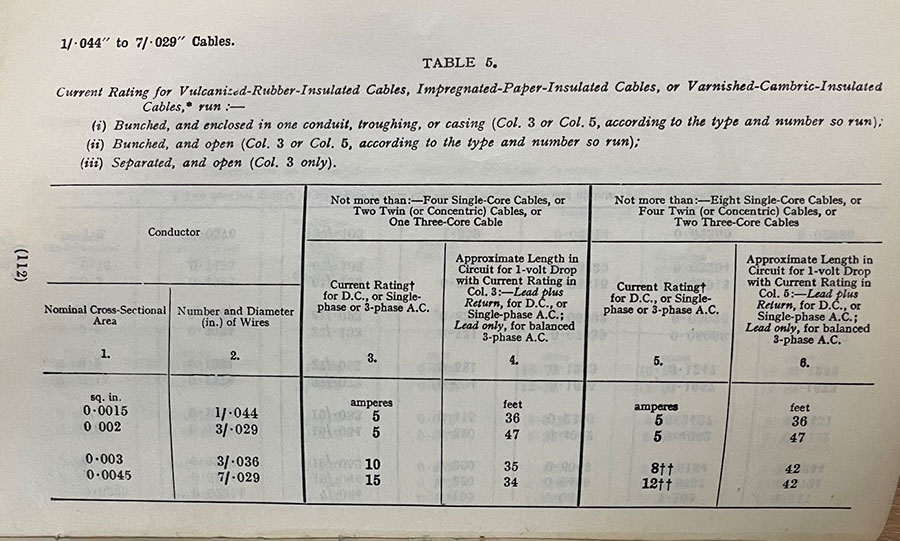 Whilst economizing on materials was desirable, energy conservation was also important, coal was used to produce electricity which was also scarce, with blackouts lasting long after the war had ended. Minimizing electricity wastage with respect to I²R losses was deemed important, even back then.

Recommendation (2) of the IEE War emergency Relaxations was introduced following the committee discussion regarding wastage of coal due to lost energy and stated that ‘when adopting the increased current ratings now recommended, consideration should be given to the desirability of so limiting the voltage-drop that the saving in copper is not offset by the increased watt loss in the cables.’

Advice was sought on using iron earth rods instead of copper earth plates. At the time, Clause 24 of the British standard for the protection of Structures against Lightning permitted, as a war emergency measure, the use of galvanized mild steel instead of copper or phosphor-bronze as a material for lightning protection systems.

Other considerations included, ‘wood casings’ and ‘capping’ as a war emergency measure to replace steel conduits in factories where it was possible to reduce the degree of mechanical protection required. Wood casing has been around since the Fourth Edition, but the Tenth Edition of the IEE Wiring Regulations provided specific information regarding the maximum number of cables to be installed.

There have been other copper shortages in history which influenced electrical installations. For instance, aluminium ‘copper clad' cable was introduced for a short period in the 1970s in response to rising copper prices. Many issues were encountered with the terminations, this was due to standard accessories being used which have brass terminals, causing galvanic corrosion of the conductors at the terminations. It didn’t help that the traditional fixing screw arrangement in tunnel terminals was not well suited to the much softer and more malleable aluminium conductor. Many installations containing these aluminium cables are still known to be in service, and it is prudent to give extra scrutiny of such terminals when carrying out inspections.

There is no doubt that the IEE Wiring Regulations Committee played its part in the war efforts. However, it is unclear to what extent the IEE emergency war relaxation measures were adopted or indeed how much copper was saved through the introduction of these relaxations.

Whilst material considerations and capital expenditure are important when selecting the size of a conductor, the I²R energy losses of a cable throughout its lifetime is an equally important factor to consider and always has been.

I would like to extend special thanks to John Peckham, not only for providing the IEE War Relaxation document which inspired this article but for the help he has given me and also his valued contributions to the IET forum and the IET generally.

I would also like to acknowledge special thanks to Anne Locker from the IET archives department, her kind offer to locate the committee minutes relating to the war relaxations allowed me to carry out the research which has brought this article to life.