DC Realisation in the 21st Century

By: Steve Devine, with thanks to the IET’s 48V DC realisation project team for their contribution

This article is part 1 of a 4-part series that will take us through the history of DC evolution to the benefits of modern-day application.

A very brief history of AC/DC (not the rock band)

In the 1880s a public electrical distribution network using DC was devised by Thomas Alva Edison. At the time electricity was primarily used to supply lighting in cities where only short transmission distances were required. However, it soon became clear that to extend the range and capacity, higher voltages would be needed – higher than the maximum safe voltage for users.

Two historical figures, entrepreneur/engineer George Westinghouse and well-known Serbian engineer Nikola Tesla proved that by using transformers to increase the voltage, transmitting AC electrical energy long distances over transmission lines could be achieved relatively efficiently and this meant that coal-fired power stations could be located further from towns and cities. This was one of the fundamental reasons that AC proved to be more desirable, after the "war of currents" between Edison and Westinghouse.

From the early 20th Century, AC has completely dominated electricity transmission over distance, but the conversion of domestic properties from Edison's DC system to AC happened very slowly, in fact, the last towns in Britain were not converted to AC until the early 1960s.

The ‘War of the Currents’ was never won

This has always been debatable and more so now than ever before with the huge increase in the use of DC for the vast majority of electrical equipment currently used. It could be argued that the battle was won with respect to the long-distance transmission of electrical energy during the early part of the 20th century but the war has still raged on and only now are we seeing the re-emergence of DC as an important part of our electricity ecosystem.

Alternating Current (AC) is a type of electrical current, in which the direction of the flow of electrons switches back and forth at regular intervals or cycles. Current flowing in power lines and normal household electricity is now almost universally alternating current. In the UK the current cycles between positive and negative and back again 50 times a second – a frequency of 50 Hz.

So why do we have AC transmission and distribution?

The simplest answer to this, as alluded to above, is that AC is easier to transmit over long distances which reduces the need for local generation. Centralising generation in larger power stations has historically delivered greater economies of scale.

The journey of most power in the UK begins at the power stations which generate electricity typically at 25,000 V AC. As electricity travels long distances more efficiently at higher voltages it is increased through a step-up transformer at the power station to between 275 kV AC and 400 kV AC for the pylons of the National Grid transmission network.

At grid substations, when the electricity reaches the regional distribution network the voltage is reduced to 132 kV AC. Regional distribution networks carry electricity to substations where the voltage is again reduced to 33 kV AC and then to 11 kV AC. The 11 kV AC network supplies towns, industrial estates and villages, as well as some heavy industrial users, such as car manufacturing plants.  Large renewable energy sources may also be connected at this level.

The final stage is the local substations and distribution networks. At this stage, the voltage is reduced to a nominal 400 V AC (3-phase) where single phase at a nominal 230 V AC can also be utilized. Many commercial outlets, such as shops and supermarkets, will have a 3-phase supply, while domestic premises (homes) will usually have a single-phase supply.

There are exceptions to this method of AC transmission. One example is the very long 320 kV HVDC bi-directional transmission line that runs from France to the UK that can deliver up to 2,000 MW. The ability to independently control the power flow through the HVDC link provides various benefits, in particular when the AC systems’ phase angles between the load and the source are not synchronized at either end of the HVDC transmission line.

Direct Current (DC) is a current that travels in one direction, this type of current is usually generated by batteries and PV systems. However, it can be generated from AC using rectifiers either to individual pieces of equipment or, more efficiently, larger distribution systems to supply multiple pieces of equipment.

Many electrical appliances and electrical equipment, such as incandescent lamps and electric heaters work equally as well with DC or AC, but this is not true of semiconductor electronics, which depend on DC for efficient functionality.

Use of modern DC appliances

Nowadays most appliances and equipment used around the home, in the office and in commercial/industrial applications incorporate semiconductors and therefore use DC internally. For these common items to operate, AC power has to be converted to DC. Distribution network operators do not yet transmit DC and have not modified local distribution to offer DC on a large scale. Therefore, devices and components are supplied with equipment (bridge rectifiers) to convert AC to DC.

The most apparent example of this takes place in the power pack between the plug and a device such as a laptop, but in many appliances such as televisions, desktop computers etc., the conversion happens inside the equipment. The conversion details are usually identified on the power data label on the product.

How much energy is wasted?

To provide a better understanding of how much energy is being wasted, we need to explain what happens during the conversion of energy when used for everyday appliances and equipment. Let us look at the typical journey of electric current to power our appliances.

We have AC from the power station. As explained previously this goes through various stages of transmission which result in losses at each change in voltage until it reaches its destination. When the AC is used to supply items of equipment such as laptops, computers etc. the AC is rectified (converted) to DC at each appliance. 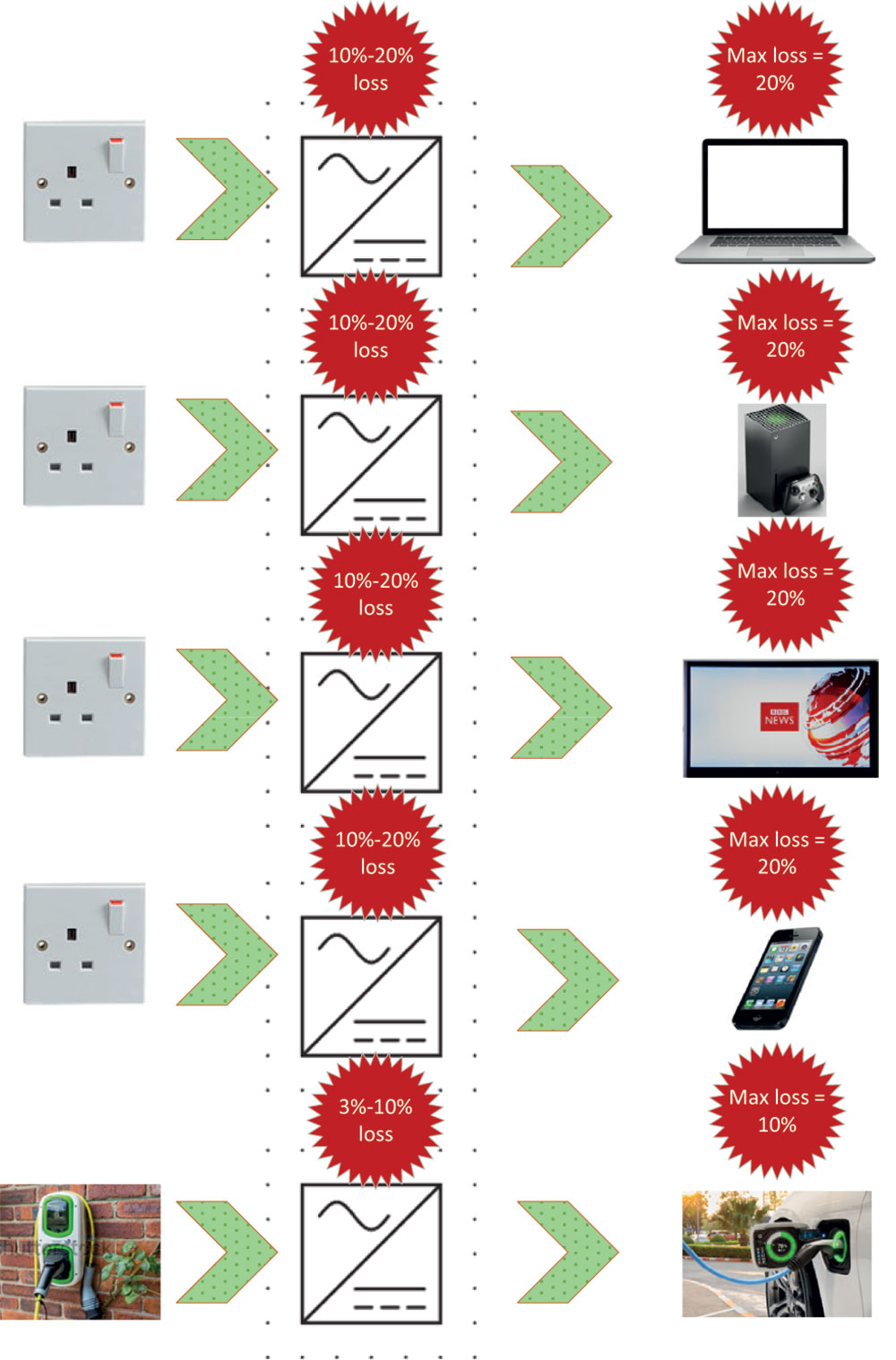 DC to AC to DC

When using Solar PV, DC is produced at the panels, this is then converted into AC at the inverter for use within the building such as lighting and socket-outlets. It is then rectified back into DC so that items of electronic equipment, including LED lighting, can be used. 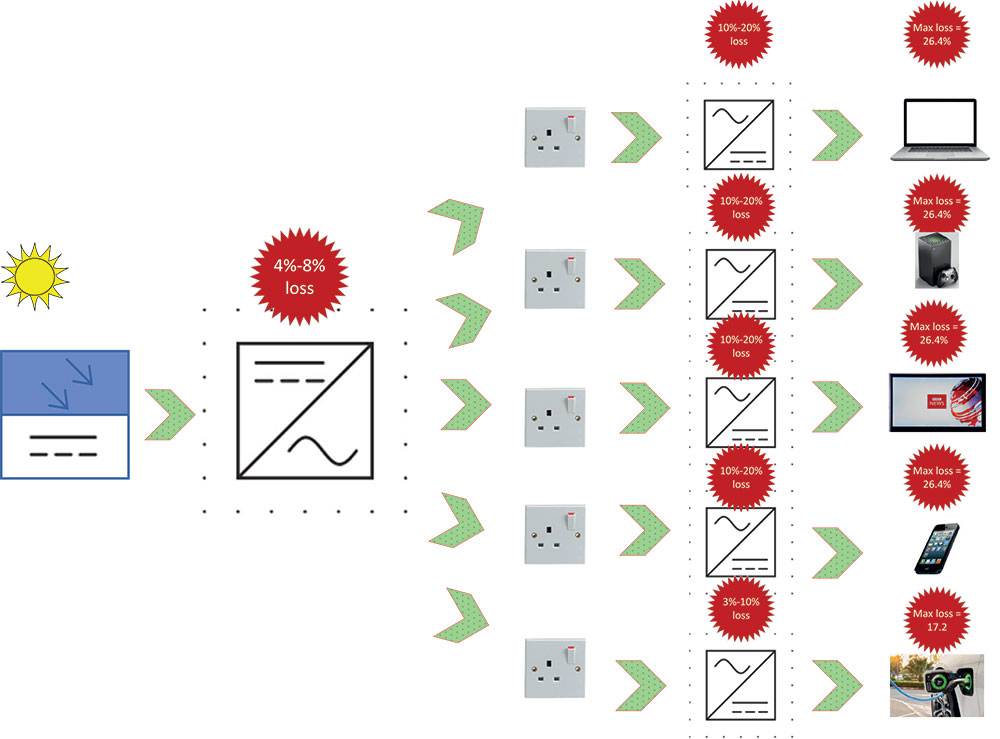 AC to DC to AC to DC

When using battery storage, a similar process to that when using solar PV applies except that you have the additional AC element from the National Grid which is rectified to DC for charging the battery. The battery produces DC which is converted to AC then back to DC for electronic equipment. 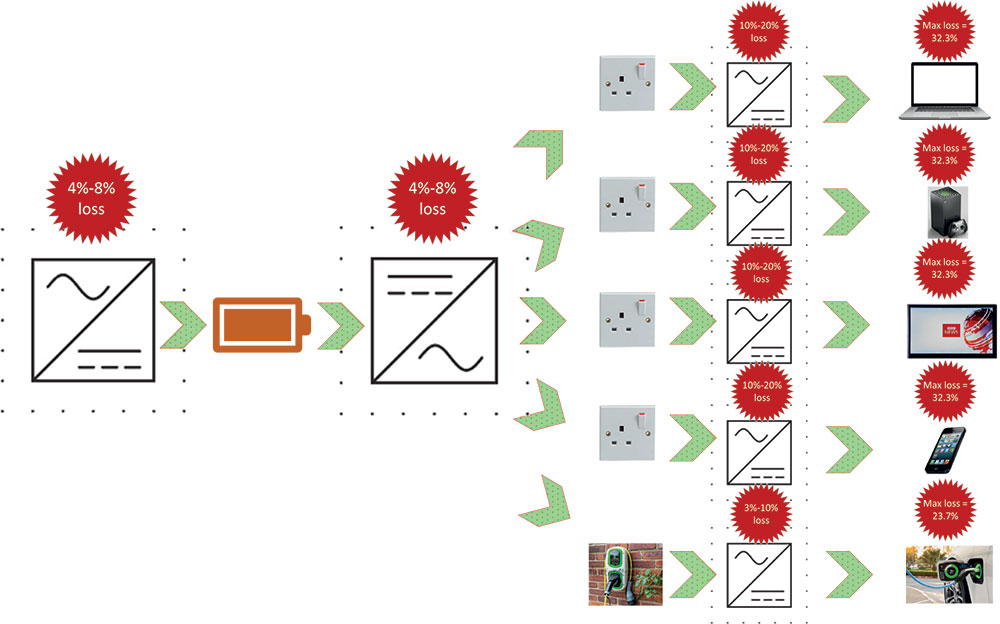 The efficiency of AC/DC, DC/AC conversion usually ranges between 75% and 85% with some superior quality products claiming 90%. This means that energy loss of up to 25% can occur at each point of conversion. The combined quantity of energy loss is almost impossible to determine but it has been speculated that in certain circumstances from generation to supply, losses of up to 70% are possible.

Add to this the consideration of embodied energy in convertors shipped with appliances, numbering in the billions, and we have a situation where massive amounts of energy and money are being wasted annually.

Why it needs improving

When you multiply the individual losses caused by AC/DC and DC/AC conversion by the number of electronic devices and equipment used in homes, offices, commercial and industrial premises the scale of wasted energy is tragic.

Our world is suffering from climate change that, for the most part, is attributed to the way in which human beings generate, consume and waste energy. We urgently need to reduce the impact that our activities have on our environment.

Efficient use of the energy that we consume is absolutely essential for our planet. DC distribution on a large scale will dramatically reduce the amount of energy wasted and significantly reduce our carbon footprint.

DC distribution can also provide energy solutions for those on our planet who are not fortunate enough to have the abundant supply of energy that we have become so accustomed to in the developed world. Introducing DC distribution and energy storage from renewable sources on a large scale will enable many people around the globe to power devices to connect with the rest of the world and provide them with the ability to communicate, educate and build more sustainable futures.

Centralized DC rectification can significantly reduce energy loss and look something like this. 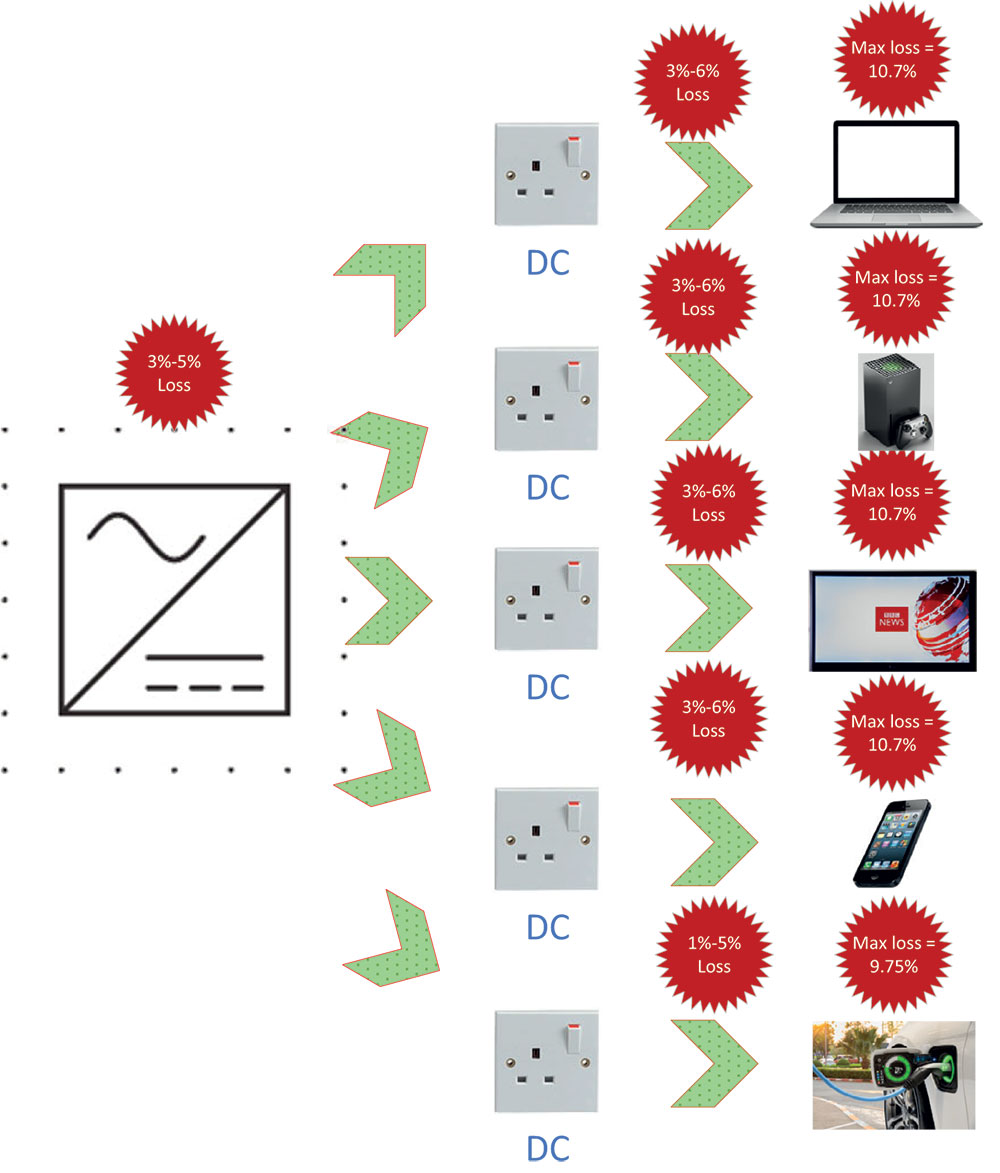 To summarise, the key issues we have are:

The IET is currently running a project to build a DC demonstration centre in its newly refurbished office at Stevenage. The IET will be introducing cutting edge technology and installing state of the art electrical equipment such as computers, monitors, lighting etc that will run from DC circuits supplied from a single point of rectifications reducing the need for local rectification to DC which will save on energy consumption, electrical components and unnecessary cooling.

We will be monitoring the success of the DC demonstration centre and collating all of our findings to enable us to publish empirical evidence to prove to the world that DC distribution not only reduces energy consumption but provides an opportunity to connect the world affordably and reliably.

It is our vision that our future can be greener, more efficient and open up opportunities for cities, towns and villages all over the world to access reliable sources of energy regardless of their limited access to reliable national grids.