Back to the Forum - History of model forms

Model forms have been discussed many times on the IET forum over the years. In this article, we take a look at their history.

In the early days of the IEE Wiring Regulations, examples of model forms were not provided. However, contrary to popular belief, there was certainly a requirement for testing, even in the First Edition in 1882, Regulation 17 stated:

“N.B. The value of frequently testing the wires cannot be too strongly urged, it is an operation, skill in which is easily acquired and applied. The escape of electricity cannot be detected by the sense of smell as can gas, but it can be detected by apparatus far more certain and delicate. Leakage not only means waste but in the presence of moisture it means destruction of the conductor and its insulating covering, by electric action.”

The Second Edition of the IEE Wiring Regulations was published in 1888. It was more prescriptive and stated that “records should be kept of all tests, so that any gradual deterioration of the system may be detected”. This was probably the first requirement for a schedule of test results, although no examples were provided.

The first actual electrical certificate in the IEE Wiring Regulations dates back to 1939 when Regulation 1108 of the Eleventh Edition stated:

“on completion of an installation, (or an extension to an installation) a certificate shall be given by the contractor, or by an authorised person acting on his behalf on form A. The space provided in the form for inserting the recommended number of years intervening between inspections should be filled in with the figure 5 or such lesser figure as is considered appropriate to the individual case.”

(Note that the IEE felt justified at the time in assuming the electrician would be male – times have changed!) The statement suggests a maximum frequency for inspection and testing of five years, with an emphasis on the requirement for the person completing the report to reduce the interval between inspections if required, which is still the same today.

Guidance on inspection intervals can be found in IET Guidance Note 3 Inspection & Testing; however, these frequencies are for initial inspection and are only recommendations. Inspection and testing intervals should be determined by the inspector, making an engineering judgement based on several different factors, such as the environment, age, use and condition of the installation. 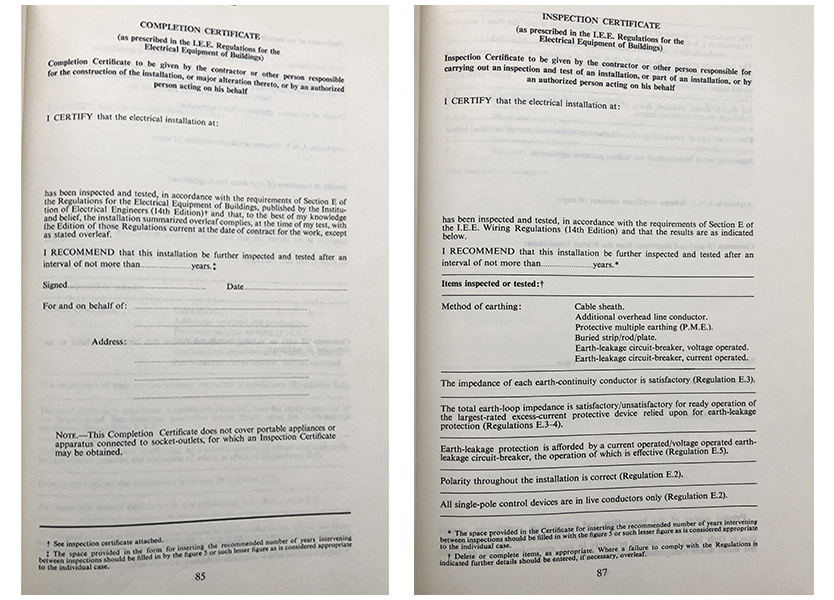 This format remained the same until the Sixteenth Edition, at which time the IEE Wiring Regulations became BS 7671, a joint publication between the IEE and BSI. This is the period at which the model forms were amended to the format we recognise today. The completion certificate became the Electrical Installation Certificate (EIC), in order to avoid confusion with the completion certificates issued at handover of a building by the construction industry. The inspection certificate became the Periodic Inspection Report (PIR), which, by the time of the Eighteenth Edition (BS 7671:2018+A1:2020), was known as the Electrical Installation Condition Report (EICR).

The Minor Works Electrical Installation Certificate (MEIWC) is the new kid on the block, with its first appearance in BS 7671:2001, the Sixteenth Edition of the IET Wiring Regulations. This certificate is intended to be used for minor electrical work that does not include the provision of a new circuit, for example, an additional socket-outlet to an existing circuit.

The model forms can be found in BS 7671:2018+A1:2020, or downloaded from our website. It should be remembered that the forms can be modified to suit the installation, providing they meet the minimum requirements set out in Appendix 6. Trade associations and other organizations provide their own versions of the forms, which may differ from the model forms.

There is no doubt that debate over classification codes for EICRs and other intricacies with model forms will continue: items on the inspection schedule have provided a good basis for discussion over the years.

Whilst the format and content of the model forms have changed over the years, the purpose is still the same as it has always been, which is to provide a record of the details for the installation and the person(s) responsible.

The frequency of inspection and testing should be determined by engineering judgement made by the electrical designer or inspector.

Model forms are exactly that: they can be modified to suit the installation requirements.

Remember, you can visit our Engineering Communities forum yourself and join the discussion.